NAPOLEON IN HIS UNIFORM OF THE PARIS NATIONAL GUARD – 1814 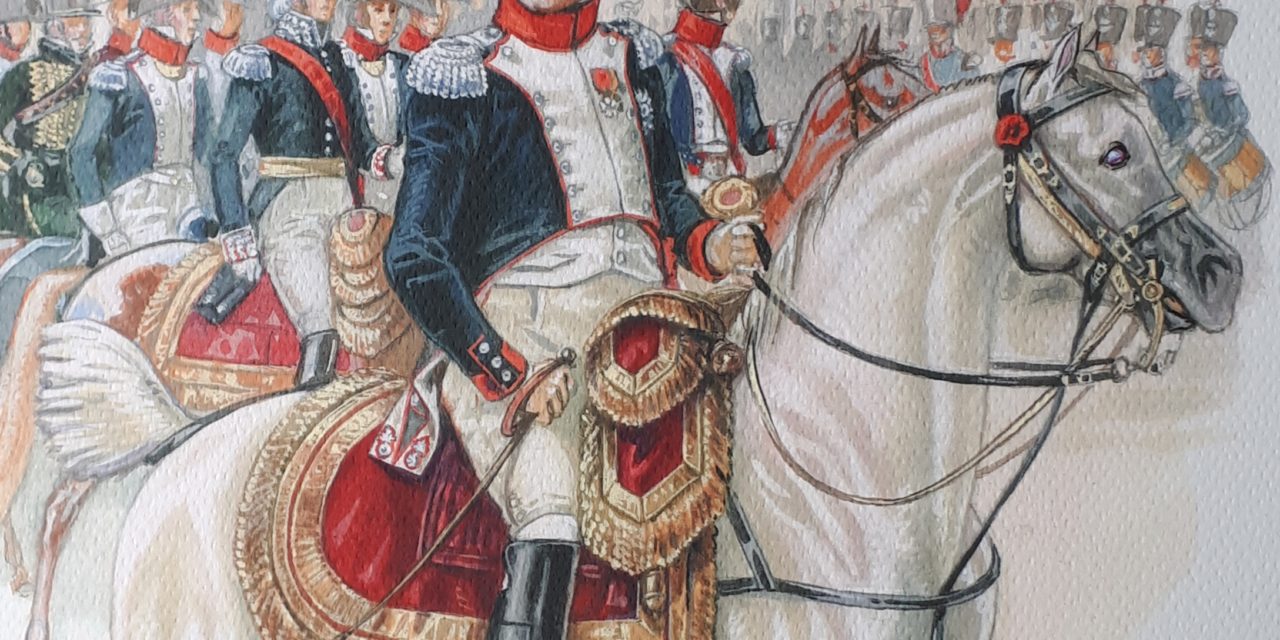 NAPOLEON IN THE UNIFORM OF THE PARIS NATIONAL GUARD

On 8 January 1814, on the eve of the army’s departure on campaign, Napoleon decreed the following:

“The National Guard of our good city of Paris is put in activity. The Emperor commands it in chief. “

At the end of January, the units were somewhat on their feet and the officers were presented to the Emperor at the Tuileries. The Emperor appeared there in the colonel’s uniform. 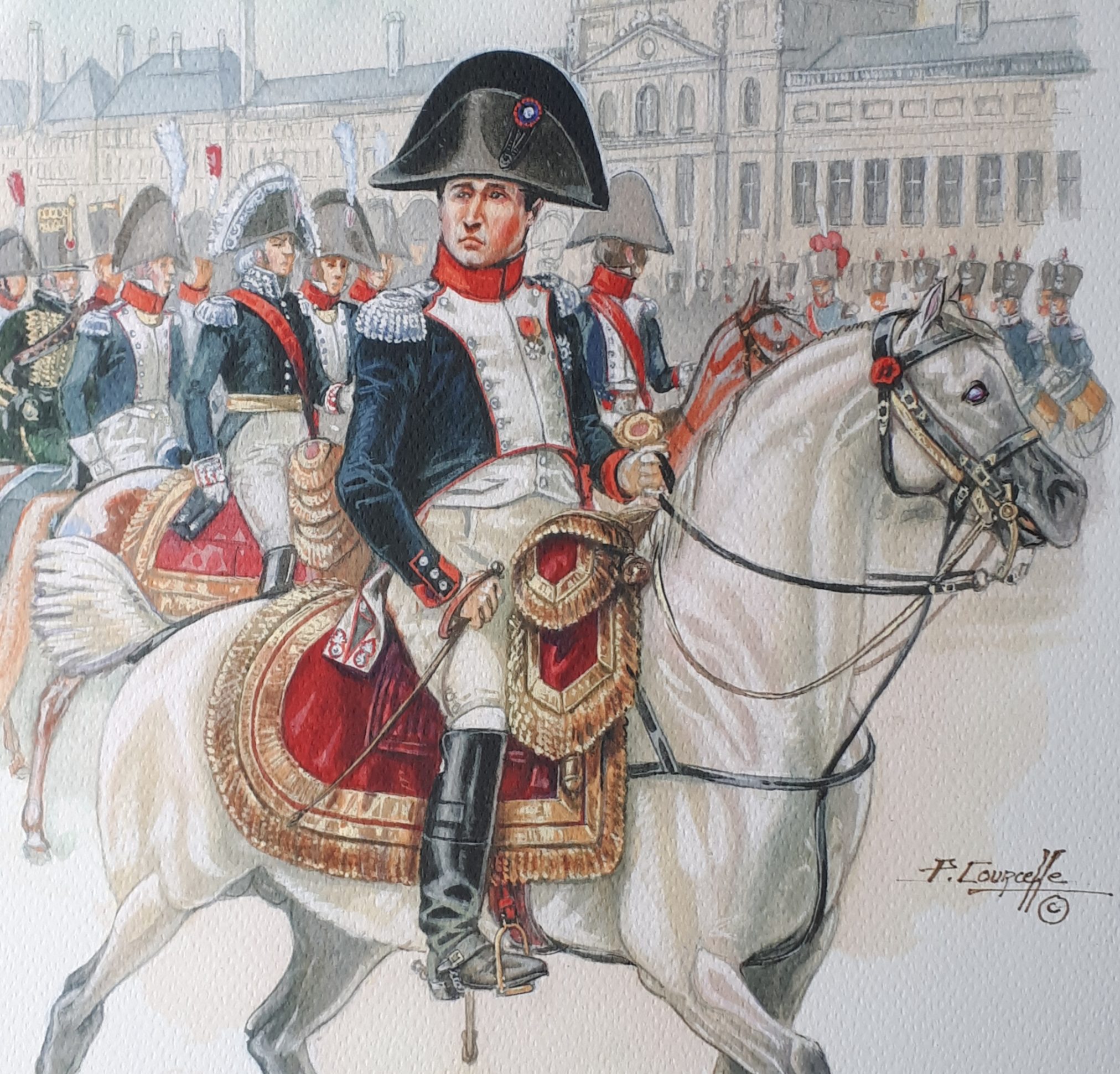 Napoleon wearing the uniform of the National Guard of Paris and mounted on his battle horse Nero, one of the Emperor’s most emblematic mounts. Wounded in Moscow, the animal is blind in the right eye.

Napoleon’s National Guard colonel’s coat still exists in the Fontainebleau collections and a photograph of it has been published in Mallet’s Histoire de France. This garment is of the regulation cut and colour for officers, namely long basques with buttons, embroidery and silver colonel’s epaulettes associated with the National Guard; the blue cuffs flaps indicating the fusiliers, the grenades of the turnbacks being undoubtedly the prerogative of the “elite fusiliers”, a new and ephemeral concept invented with the decree of 8 January 1814 specialy for the Paris National Guard. The emperor’s coat is still distinguished by the absence of the regulation white piping on the collar. 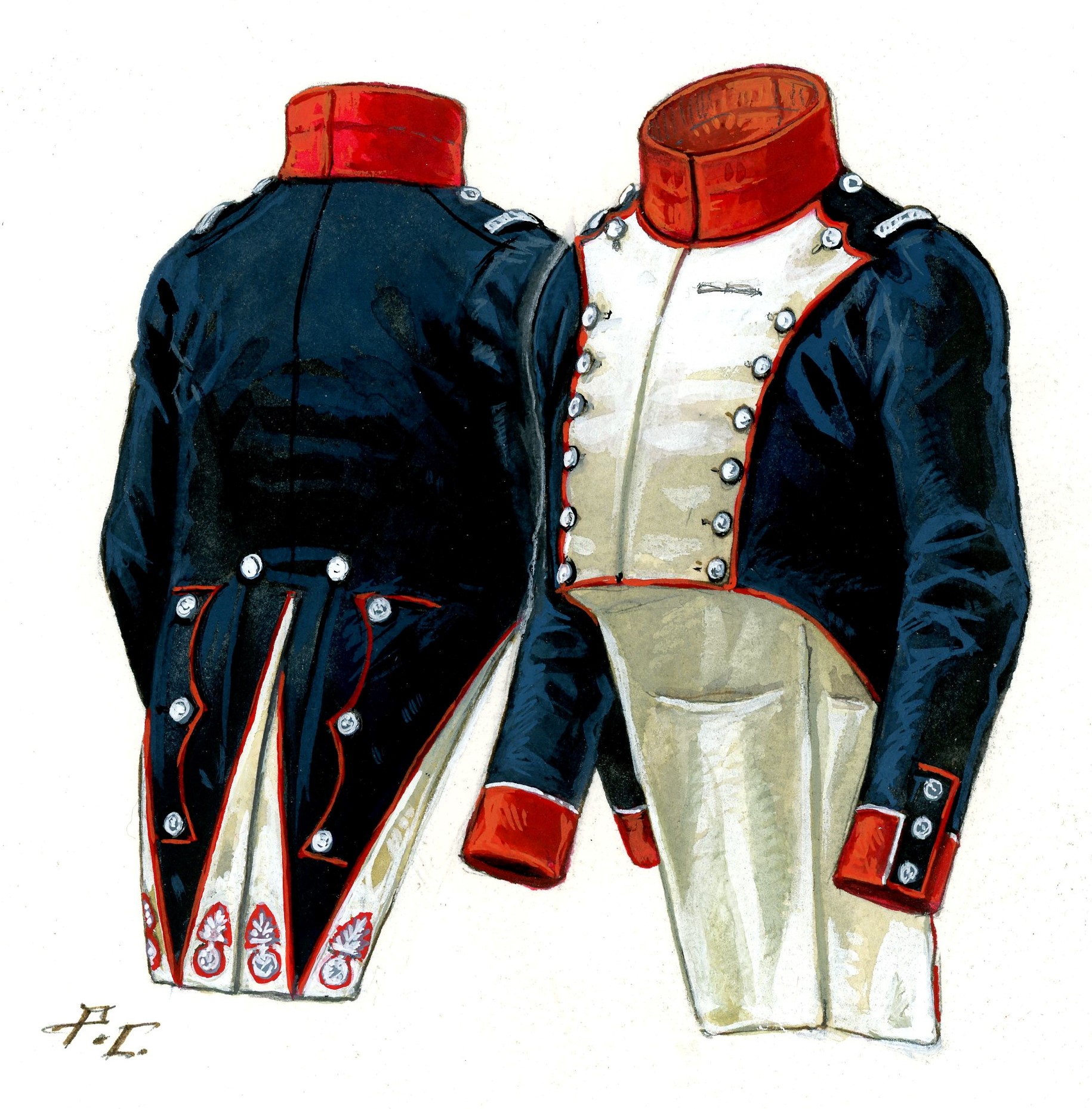 This elite fusilier officer’s uniform worn by Napoleon in various circumstances in early 1813 is now in the Fontainebleau Museum. The drawing shows the front and back.

Our representation shows a harness taken from a very beautiful equestrian portrait of Napoleon, an anonymous painting, contemporary with the beginning of the 19th century according to the workmanship, which could easily be attributed to Vernet.  The saddlecloth and fittings of incarnate velvet bordered and fringed with gold without too much ostentation could belong to a simple general. It seemed to us well suited to the circumstances of this parade at the Tuileries.

A general’s non-regulation saddle that is both rich and simple, rather far of the sumptuous harnesses with which Napoleon’s horses were sometimes decked. Lovers of fine detail will note, along with the fringed tassel of the cast iron hood cover, that the fringes of the set are not left loose but sewn side by side.

As is often the case, we do not know what horse the Emperor was riding in these special circumstances, when France was tired and the army was facing a difficult campaign. However, we can imagine that he chose an animal that was both emblematic and symbolic. The Herodot, also called the Nero, a beautiful full-blooded horse of English blood, veteran of several campaigns, would correspond perfectly to these requirements, which is why we have preferred him for our representation.

The stallion was seized in 1806 at Ivenach in Mecklenburg with the whole properties of Count von Pless, it was with a grey coat, dappled on the rump (1), nictated and with a short tail. The Herodot joined the « saddle equipage » on 7 February 1807 and was given the name Nero. It is said that Napoleon rode him the next day at the Battle of Eylau. He is known as a fast horse, one for particularly critical situations.  At the time shown on our painting, Nero is one-eyed in his right eye, since 1812 when he was shot in Moscow.

After the defeat and abdication, Nero left Paris and went to the Haras de Tarbes, where he was found by Field Marshal Blücher, who asked for his return at the Congress of Vienna. It was not until 1818 that he returned to Ivenach until his death in 1828.

(1) This feature, according to Caulaincourt’s books, must have been very discreet because it does not appear on the representations of Nero. 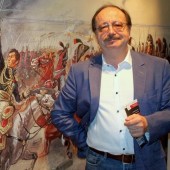 CUIRASSIERS OFFICERS AT THE CORONATION OF NAPOLEON – PART 2 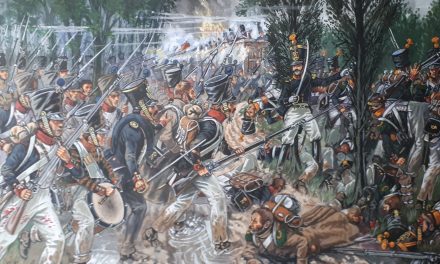 THE NIGHTMARE OF THE ATTACK ON THE HOUGOUMONT ORCHARD